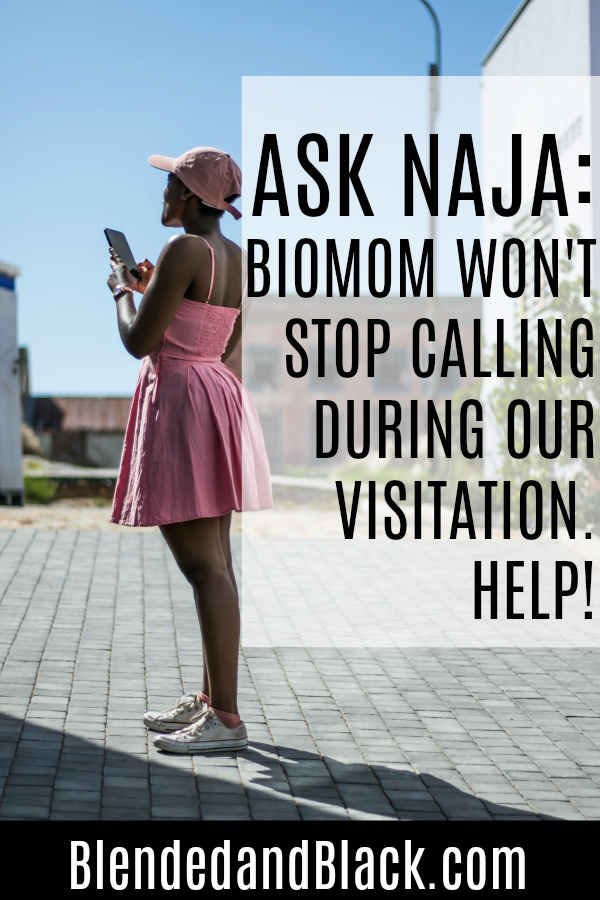 My husband asked me to post this because he’s at a loss for what to do. He has 50/50 joint physical and legal custody of the kids. In addition, in the court order he requested it be written in that we have two uninterrupted weeks during the summer with the kids because BM was calling non stop. BM gets 2 weeks as well and DH doesn’t bother the kids when they are with her. This is our first week of the two weeks. In just 2 days she has called or texted over 20 times to speak with the girls. When my husband doesn’t answer right away she texts me.

I had family in town and there were about 12 kids in the house. The twins were having a blast and her constant calling them was cutting into their fun time and getting on my husband’s nerves. Also when she calls she wants to speak with them immediately no matter what we are doing, even if we’re having dinner or giving them a bath. So my husband told her yesterday that she could talk to them after they got out of the pool. So it started raining and she texted him an an angry message about it raining and they need to call her. We live 10 minutes apart. We’ve all been getting along well lately and from time to time this happens. So we expect it after a period of calm. I think she has some control issues.

My husband is at the point that he doesn’t want to communicate with her at all. But she’s totally different with me. She almost acts as if she’s afraid of me. But I’ve chosen to sit this one out because I want my husband to stand up to her once and for all. I was recently diagnosed with Lupus and my doctor told me the kind of Lupus I have is almost always triggered by stress. BM stressed us the he’ll out for 2 years. I lost a baby over it. Now I simply will not engage in the drama so she doesn’t treat me like she does him. So please offer some word of advice for my husband.

There should be established call times. Since this blended family seems to get along “better” than most, firm communication about the OVER communication should not present any major issues. I do see that BM may be a tad manipulative in trying to be nice to SM but berate her DH. Husband and Wife are a united front and if one is mistreated, then the other should stand down until the disrespect is acknowledged. Custodial parents, I know it’s hard, but allow your children to bond with their other parents in their other home. You don’t call their school and interrupt their day, so pay the same respect to their time with their family. Your co-parent may feel like you are undermining them and that never goes over well. While the kids are away, wish them well, tell them you love them and call once…maybe twice a day! Find a hobby, go workout, get some rest! Take advantage of the free time.

How would you handle this scenario?

Below are a few of the responses from members of the Facebook support group. As you can see, our members are opinionated, funny and sincere.  They give a wealth of input and they are right on the money.

*Responses are copied directly from members. We do not edit or manipulate for authenticity.

As a former bitter baby mama I recognize this tactic it’s about control and imposing on your time. Make it clear BEFORE the visit starts that we will call you only IF there’s an emergency or they ask to call. After that DO NOT entertain any calls or texts during the visit. BBM don’t like it but eventually she’ll get the picture.

I commend you for trying to keep the peace. However, I think the baby mama is exerting a certain level of control in that she deems it okay to treat you with respect but not your husband. I think the conversation needs to be had to let her know she can’t pick and choose who she’s going to treat with civility because as husband and wife, you two should be a united front. She shouldn’t have access to you after disrespecting your husband. She’s using you as a pun and whether your husband expresses it or not, I’m sure he feels some type of way about the difference in behavior that the baby mama displays towards you versus her choice of behavior with him. Stop coddling the baby mama’s rude antics. Show her that y’all can’t be buddy buddy while she is disrespecting your husband. You and your husband should set specific times that the children will talk to the mom and don’t waiver under her attempts to control and manipulate. She can’t run nobody’s household but the one she resides in. And these pop ups that she does needs to cease. She needs to know the kind games are over.

Our judge couldn’t believe dad wouldn’t answer the phone when I called. And…not right when I called. I get doing something. But if I called at two pm, Dad not call back at all. He argued “my time,” in court, but as parents, we are charged with instilling love and affection in children for other parent-even when it stinks. So Dad was ordered to have child available every night he’s with him. First time he declined to comply. Judge tore him a new one. Her point was-in the bigger scheme of things-what does it matter? Kids want to talk-unless there’s an issue. It’s us per her opinion, that intervene. Now-after some tough times Dad has gone through, we both call whenever. And it’s no big deal. I hope somehow this helps.

Your husband should honestly just ignore her texts/phone calls. Don’t engage her. Have the girls call her once a day, every other day, once per week or whatever schedule he set up. Any other time, just ignore. If she texts/calls you, continue to ignore. No matter what she texts/says, just ignore her. It will only work if you continuously ignore and don’t respond to anything she sends, no matter how crazy/rude/ she gets.

I think you all need clarification on uninterrupted time. However, I would ignore her phone calls and text. Have the girls call her at a set time each morning and evening. Stop responding to her. You all are giving her more power than she deserves. Anyone taking up that much time in your head needs to be paying rent.

I’m not as mature about certain things as other folks in here so take this with a grain of salt. Give her a set time to talk to them. Say, “The girls will call you after bath and before bed.” If y’all don’t have set bedtimes just give her a time. Then block her number until y’all are ready to talk or give her one of those silent ringtones. She can text to her hearts content and unless you’re always on your phone you won’t know until you’re ready to know.

UPDATE FROM MEMBER: I sent BM a message earlier. Then she and I met for dinner tonight and had a very productive conversation. I let her know that she needed to speak to my husband in a more respectful tone. She agreed that a more realistic time to call would be after dinner as the kids are winding down for the evening. That way she does not cut into our family time. I agreed that we would help facilitate those calls unless it’s during uninterrupted time. She said she was emotional because my husband is always so vague with her. She understands that he became that way because of her past actions but she said she’s ready for us to let that go. I explained to her that he didn’t need to be anything other than who he is because he is a grown man and that she needs to let go of her need to control the situation. So she promised to work on that. She swore that she wasn’t trying to be some crazy ex and didn’t want it to come across that way. We ended the dinner talking about other random stuff and promising to keep the peace in our blended family.

Since you’re here, I’d really appreciate it if you signed up for our weekly newsletter! My team and I send highlights, special offers and MUCH more exclusively to our subscribers. And don’t worry, we don’t like spam either! Your email will not be sold to 3rd parties.

Can We STOP Recreating the Definitions of What Makes a Single Parent? ASK NAJA: My Son’s Expensive Toys Always Get Broken at Dad’s House

ASK NAJA: I resent Biomom because all the pain she caused my man

Ask Naja: Should my Husband and I tell his Ex we’re expecting

Ask Naja: My Stepdaughter won’t visit unless we PAY her!