The BioMonster: 3 Ways YOU Created Your High Conflict BioMom 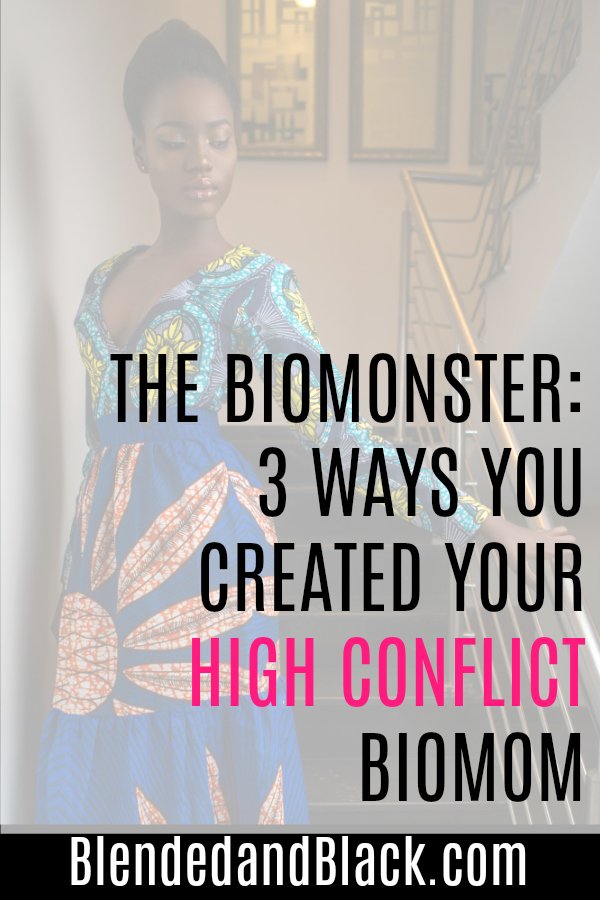 A warning for Stepmoms (and biomoms).  Yes Stepmoms, you read that right. The BioMonster (high conflict bio mom) you’re dealing with was created with your help – the Stepmom who chose a life most would run away from. For those of you who haven’t heard of the term “BioMonster,” I’ll define it like this: a (seemingly or actual) high conflict biological mother who does not get along with her ex nor his/her “new” partner. BioMonsters make co-parenting difficult. They constantly gripe about trivial issues or seem to feed off of conflict and negativity. Notice I used the words “seemingly or actual” in this definition. I’ll get back to that later. No one wants to deal with a BioMonster. A successful blending situation requires peace and smooth co-parenting for the sake of the innocent children involved. And that’s something we all want, right? Stepmoms, if you find yourself dealing with a BioMonster, here are three ways you could partially be at fault.

YOU CARED TOO MUCH

I have been in a blended situation for 13 years. This one was my first mistake. How can a Stepmom care too much? How could caring too much possibly be a bad thing? One word: boundaries. Many new women hit the ground running when they are first given that heavyweight title – because damn does it feel heavy! Some are still just girlfriends (an insulting way to address a woman by the way) who see a future with their partner and take on the role unofficially. Either way, they tend to forget the fact that we must learn to crawl before we can run. These Stepmoms want to handle everything as the primary parent would. They plan everything related to their stepchild, reach out to Biomom more often than is appropriate, and seem overbearing, unable to understand that some privileges in co-parenting are earned with time. A Biomom may feel rattled by a woman who is trying too hard and seems to want to take over her ex’s position as Official Co-Parent. These Stepmoms come across as obsessed with wanting to play the “Mommy” role even when Dad had already been doing just fine without her. Like I said, I’ve been that woman and genuinely meant well. I wish I had been given this advice: BACK OFF. Jump in as needed and work quietly behind the scenes. While many Stepmoms may feel the need to become heavily involved (passive husband anyone?), tread carefully and learn to acknowledge when you’re doing too much. If you’re not careful, you’ll become “my child’s annoying Stepmom who is all up in my face” and co-parenting will become difficult for your partner. Don’t make that mistake.

YOU CARED TOO LITTLE

This may upset some Stepmoms but some of you need to hear this. When it comes to your blended family situation, please allow your stepchildren’s needs to come before your wants. What I mean by this is that you may find yourself in a situation where inconvenience will force your spouse to have to put you second. For example: BioMom’s car broke down and she is unable to pick up your stepchild. It’s not Dads day, but he may have to cancel dinner plans with you to tend to his child. The most insensitive remark a Stepmom could make in a scenario like this is “It’s not your day – it’s not your problem. Make her call a taxi or AAA. We had plans long before this happened.” As Stepmoms, we have to know when to support our partners and help establish a peaceful environment for the sake of our stepchildren and all parties involved. Making snide remarks or making our partners feel guilty as if they have to choose between us or their children is a recipe for divorce. Step outside of that mentality and start showing that it’s not all about YOU. Quite frankly, any man seeking advice about how to deal with a Stepmom like this will likely be told one thing: “leave her. She’s selfish and your kids should come first.” Don’t ruin a potentially beautifully blended family with your feelings of entitlement or a “that’s her problem” mentality. You’ll regret it.

Biomoms, this one is mainly for you to pay attention to. Some Stepmoms spend years trying to find the right rhythm. Through trial and error they’ve learned when to step in, and just as importantly, when to step out. They love your children like their own, but understand they never can or will replace you (if you’re an active, loving, non abusive Biomom- some Stepmoms DO replace toxic mothers.) And yet, they find themselves dealing with a “bitter baby mama” who is hellbent on making things difficult. The mere existence of these Just Right Stepmoms is enough to have created an insecure BioMonster even when Stepmom has done no wrong. Yes Stepmoms, the only part you played in creating a BioMonster in this case was by simply being a part of your partner and his children’s lives. There is no solution in this scenario. Remember that these types of mothers suffer from insecurities, and I will even go as far as saying that they suffer from a personality disorder.

Above I mentioned the words “seemingly or actual.” What I meant by that is that many times a “BioMonster” may only be perceived as such because of miscommunication. We have all experienced the issue of being misunderstood when written or even stated words can be taken out of context. Conflict ensues and we aren’t dealing with a BioMonster but are in fact simply having communication issues. The “actual” part of the definition above comes from the simple fact that some BioMoms are in reality just plain toxic and they make that very clear. What’s important for Stepmoms and their partners is to know the difference and understand who they are dealing with. Stepmoms, do your best to avoid the first two scenarios. Stepmomming isn’t for everyone, but if you’ve sincerely got your heart in it and want it to work, know when to acknowledge your mistakes. No, BioMoms are not off the hook in those two scenarios because a grown woman should learn to deal with issues without hostility and vindictiveness so as to avoid the title “BioMonster.” But as Stepmoms, we can do our best to not take part in their creation. BioMoms, a strong warning about being unnecessarily difficult. Children are fast learners. They see and know more than they say. If you’re being toxic and making co-parenting difficult, your child will hurt the most. You will teach your child vengeance, hatred, and all the negative emotions you project on your ex and your child’s Stepmom. Your child will grow up either repeating your behavior or learn to decipher the truth and forever resent you for the damage you’ve done. Stop now before it’s too late.

Are you ready to escape the toxic tango that plagues Stepmoms and Biomoms? Check out my new book HERE! I’m feeling generous today, so here’s a 15% off discount on the eBook! Use code bbgroup15

From Single Dude to Single Dad. A #QuickChat with Will Carr 5 Ways To Rekindle Intimacy In Your Relationship

This couple left divorce court and went to lunch

How to Co-Parent After Divorce and Infidelity

I’m Over the Drama: A Happy Mom’s note